Updating The Kitchen On A Budget

I’ve mentioned before how I am elbow deep in refurbishing the ultimate fixer – upper home. Work on the bathroom remodel has slowed due to the plasterwork needing replacing. I’ve been busy planning the rest of the home refurb though, and become well acquainted with paintbrushes. Eventually, I want to knock the kitchen and dining room into one, and have an island separating them. It’ll be a few years until I can afford to do that though. So in the meantime, I’ve been searching for tips and ideas on updating the kitchen on a budget. So read on to find out what my plans are.

Updating The Kitchen On A Budget

My kitchen is like something from 1980. I’m talking wonky worktops, mis-matched units and no space for a washing machine. (Seriously). The kitchen was designed around a twin tub washing machine, and the under counter gap I do have is for an under counter fridge, so it’s too narrow for a washer. I’ve got a work-around though. Find out what I’m planning below.

Paint The Kitchen Units when updating the kitchen on a budget

The first job on my to do list is painting the kitchen units. I think they were probably cream originally, but some have become discoloured over the years. So after a good scrub, I’m going to paint them all white. (I love monochrome). 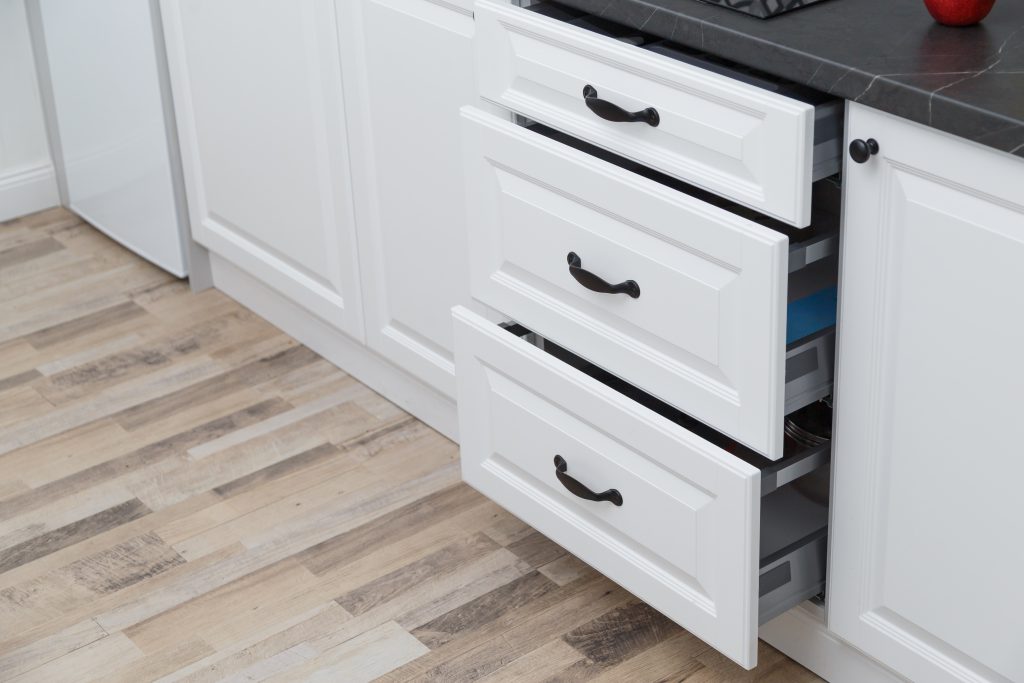 Once the units have all been painted, I’ll replace all of the old brass cupboard door knobs with black ones like those above. I’ll also remove one of the cupboard units, so I have space to slide my washing machine under the counter! This will mean In need to move the sink over slightly though, so I’ll need to replace the worktops.

The current worktops are a kind of cream / pink swirly pattern – definitely not fashionable. If I didn’t need to move the kitchen sink, I’d probably have just put up with these worktops until the big rip – out. I’ve done loads of searching though, and have found a great value local Granite And Quartz Installations company. I want a black Granite style worktop, so it’ll pop against the white units. I’m going to replace the sink with my “forever sink” at the same point, so at least my sink and worktops will be pretty!

I’ll be painting the current Sage Green wall tiles and walls white, so the worktops will break it all up. I love plants, so will be breaking up the black and white with pops of green foliage on top of the wall cabinets and in the corners of the worktops.

The current floor in my kitchen is ceramic tiles from around 1960. Lots of them are chipped and cracked, plus there’s lots of marks from decades of footfall. When I eventually rip everything out and start again, I want black slate flooring. Got now, I’m going to put down a black slate effect vinyl.

What do you think of monochrome? Are you a fan? Finally, let me know in the comments if you’ve got any tips on updating the kitchen on a budget.

This site uses Akismet to reduce spam. Learn how your comment data is processed.